So as I write this at Perth international (Terminal 3 for those who are plane geeks) it is the morning after the day before, and after two months of pain at the hands of Australians, Charlotte Edwards led her England women’s team to a test victory in one of the most enthralling games of 4 day cricket I have been privileged to witness.

Yet I begin with a complaint…..

It was a brilliant game of cricket with every session filled with drama, and in periods of the three and a half days, every ball was an event which may have changed the path of the match…. And no-one was there to witness it. The locals had no clues it was even being staged. The first piece of information in the local rag, the West Australian, was on the morning of the match but by then it’s too late as potential spectators have sorted their weekend plans. Even my good friends, the Perth cabbies (who usually have their fingers on the pulse) were wondering why we wanted taking to the WACA (before proceeding to take us to Belmont Park racecourse).

Here is where the ECB do deserve some credit for their work in promoting the game last summer. The Women’s ashes was advertised alongside the men’s, the marketing campaigns and billboards within the test grounds that had Stuart Broad or Jimmy Anderson in front of fire with the twitter hashtag ‘rise’, also had Charlotte Edwards and Sarah Taylor on billboards in a similar vein. I would say this but this time last year, the Women’s World Cup in India garnered huge interest when the BBC broadcast it on the radio, and similarly when we trailed it ahead of the first test at Wormsley. The UK public knew about it, hence 2000 paying punters in the first day at Wormsley, 5000 (3,000 paying I understand) at Chelmsford for the first T20. 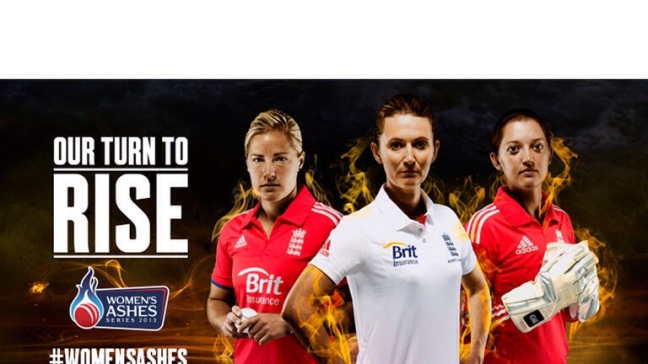 Overall, the product the women are selling is seriously good. I’m not being politically correct about this, I will tell you how it is and am more than happy when commentating to be critical of the cricket in front of me. There were parts of the Wormsley test that were painfully boring at times (and excellent at others) and I said so. Yet I actually believe that the reasons for that, was not any deficiency in talent. The pitch was slow, a point I’ll come to later, but moreover the women don’t play four day cricket, so naturally the approach to the longer format may be naive at times. Come the one-dayers and the T20’s it was far more comfortable.

Australian cricket is on a huge high….. The 5-nil Whitewash and the ‘returning of the urn’, which has lifted the country and in turn has boosted the interest of the domestic Big Bash T20 league, with hoards of spectators both at the venues and watching on television. So what a perfect opportunity missed at the Perth test just prior to Christmas. In front of 5 days of packed WACA stands, Cricket Australia could have had the Southern Stars billboards out, or the players around the ground inviting spectators to come and watch them. Oh and reminding them that if they did come to watch it wouldn’t cost a cent.

There are real stars within the Australian Women’s team and they are hugely marketable to any audience, male or female. Meg Lanning, Holly Ferling and of course Ellyse Perry, the wunderkind, who not only is the standout cricketer within her side, but also represents Australia at football too. Yet bar social media, there was no newspaper, tv or radio output to inform the Perth public of the test’s existence. Which is a great shame.

In a bizarre twist….

I am going to now, after having a pop, give some props to cricket Australia. I was so grateful to be part of the BBC Test Match Special team, and the ABC Grandstand team in commentating on the test victory for England, in fact below is the very moment that I called the final wicket along with a very neutral (!) former England player Isa Guha.

It seems that no channel had bid for any television rights for the test, and so (I think) late on in the piece Cricket Australia decided to live stream the entire match on their website and add our commentary on top of their pictures. Granted, it was quite basic, three or four cameras, but it was good enough and so you had, in my opinion the best of both worlds. I know that it received an excellent number of hits from both within Australia and back in the UK, for those who were awake!

I had a number of tweets posted to me about how pleased many were to have the facility to watch. Not just the live pictures, but a swift highlights package was put together as well, for those who had missed any of the action through the night. Great work. It would have been marvellous had a television network picked up a highlights channel. Instead, channel 7 show the Legends (lingerie) football league.

I am not a prude and I like an attractive girl, and in fairness the LFL is after the watershed, but really? Give me strength. Give me highlights of the women’s test anytime. I imagine I’m in the minority especially with TV execs, but it would be nice if I wasn’t.

There are lots of match reports out there in the inter-ether, so I’m not going to write one, but I would like to mention a couple of aspects. There are a couple of very exciting new talents who it’s worth keeping an eye on and those who are known and have moved into the category of World Class in the women’s game.

In my opinion, over the past year since, Anya Shrubsole has become, along with Ellyse Perry the most feared quick bowler in the women’s game. Both completely different types of bowler, Shrubsole in swing and leg-cut, and Perry away swing and off cut. But I’m English so I’m going to talk about Anya. She has had injury issues aver the last 12 months, which hopefully she is over, as every time she has put on an England shirt, whether red, white or blue, she makes a difference. I will always go back to last years World Cup super six game against Australia and her set up and dismissal of Jess Cameron with two leg cutters and a hooping inswinger which had the poles cartwheeling, but she has matured and is the one that now Charlotte Edwards turns to.

In this past four days, it was Shrubsole who got the ball rolling on the first evening with the removal of Meg Lanning and then picked up the slack as the senior bowler after Katherine Brunt was removed from the attack for the innings by the umpires, after bowling too many balls bowled over waist height. The temperature was 44 degrees, and Shrubsole took four-for, rolling the Aussies late afternoon on the second day. Then, final day, I suggested prior to play that morning that England needed to open with her. Commentary partner in the box, Terry Alderman (only taken 950-odd first class wickets) Said the exact same thing. Not sure of any rhyme or reason why she didn’t but Australia got off to a flyer chasing down a low total. Edwards turned to Shrubsole, and now England are 6-nil up.

It is unfair picking out one or two individuals from an excellent team performance. But it’s my blog and hopefully I will write about others another time. There are also those who didn’t perform the way they’d like. Sarah Taylor or Heather Knight or Lydia Greenway didn’t score any runs (I’m sure they will during the series) but goodness Taylor kept beautifully, Knights low catch at first slip to remove Cameron was critical, and Greenway must have saved 40 runs at backward point on her own.

Others are models of consistency, Brindle, Gunn, and the captain, excellent, Nat Sciver on her debut will be mighty pleased with her work, and poor old Dani Hazell had to play at the WACA… Not overly fun as a spinner!

Katherine Brunt is a small concern…. I think she would openly admit that by her standards she bowled poorly on a wicket that assisted… She only bowled 8 overs in the warm up match after hardly bowling competitively since last summer. She needed another burst. However, I always enjoy watching her bowl, and the Yorker to finish the match was perfect.

But what a joy it was to see the emergence of Kate Cross. The Lancashire seamer, daughter of a former 1st division footballer David Cross, must have thought that test cricket was a doddle in her first over. Brought on at first to swap Ends for Brunt and Shrubsole, she nipped out Jess Cameron with her 4th ball, and Charlotte Edwards probably thought that off the back of a successful first over she can have another, and promptly follows up with another, helping England to reduce Australia in their first innings to 37 for 5.

On the third evening from the Prindiville stand end, she produced a spell that (at the time) we thought had won the game. At one stage on Hat-trick ball after removing Lanning and Cameron, she had to wait only a few more balls until she saw off Blackwell. A proper seamer, she hits the deck, bowls lively pace, and always asks questions of the batsmen. 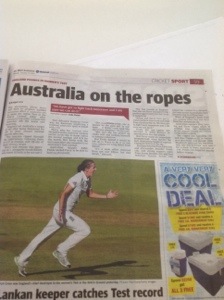 Whilst she was performing, her brother Bobby got in touch via twitter, and turns out we had played against each other in Lancashire as youths. Then the entire Cross family delved into their Social media side, including David who I’m sure was immensely proud, as would they have all been. When I interviewed Cross at the end of the first day, naturally she was beaming from ear to ear, was not afraid to talk, and was so engaging. Keep an eye out for this girl, she’s got something.

Just as an aside, someone sent me the YouTube link to watch David Cross in action when he played for West Ham. (Here it is) A front man, arguably his best day came at White Heart Lane, scoring all the hammers goals in a 4-0 thrashing of Spurs. Great though that was, what caught my eye was his post match interview. When asked if he was given the match ball, his response was that he had, but had given it to the West Ham goalkeeper Phil Parkes, as Parkes complained that ‘keepers never got a chance to earn a match ball. On David Cross’ best day, he made that gesture. That is great character, and from what I’ve seen, the apple doesn’t fall far from the tree.

These girls are a class act. After the test, Beers in hand they all go and play cricket with Arran Brindle’s son Harry….. Photo taken from @lottie2323